A staging system is a standardized system of indicating the extent to which a cancer has spread. Staging describes the extent or severity of an individual's cancer based on the size of the original (primary) tumor and the extent to which it has spread within the body. While there are several different staging systems for prostate cancer, the most widely used system in the United States is called the TNM System. It is also known as the Staging System of the American Joint Committee on Cancer (AJCC).1

Staging is based on knowledge of the manner in which cancer develops. Cancer cells divide and grow to form a mass of tissue called a tumor. As tumor growth progresses, it can invade nearby organs and tissues. Cancer cells may also break away from the tumor, entering the bloodstream or lymphatic system. By moving through the bloodstream or lymphatic system, cancer can spread from the primary site to form new tumors in other organs. The spread of cancer is called metastasis. 2

The TNM System describes the extent of the primary tumor (T stage), whether the cancer has spread to nearby lymph nodes (N stage), and the absence or presence of distant metastasis (M stage). The TNM System has been accepted by the International Union Against Cancer (IUAC) and the American Joint Committee on Cancer (AJCC). 9 The stages described below are based on the most recent version of the AJCC staging manual. The clinical stage is based on your tests before surgery, such as your PSA results and your doctor's assessment of the cancer from the DRE. If you have surgery, your doctors can determine the pathologic stage, based on the surgery and examination of the removed tissue. There are 4 categories for describing the prostate tumor's (T) stage, ranging from T1 to T4.10

For many cancers, TNM combinations correspond to one of five stages. Once the T, N, and M categories have been determined, this information is combined, along with the Gleason score, in a process called stage grouping. The overall stage is expressed in Roman numerals from I (the least advanced) to IV (the most advanced). 11 This is done to help determine treatment options and the outlook for survival or cure. The following graphics, reproduced courtesy of the National Cancer Institute, show the urologic organs and prostate cancer stages. 12 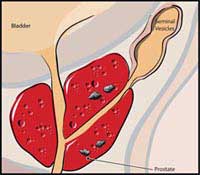 In stage I, cancer is found in the prostate only. It cannot be felt during a digital rectal exam (DRE) and is not visible by imaging. It is usually found accidentally during surgery for other reasons, such as benign prostatic hyperplasia. Stage I prostate cancer may also be called stage A1 prostate cancer. 13 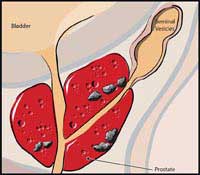 In stage II, cancer is more advanced than in stage I, but has not spread outside the prostate. Stage II prostate cancer may also be called stage A2, stage B1, or stage B2 prostate cancer.14 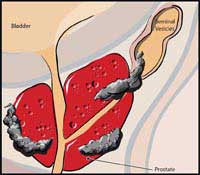 In stage III, cancer has spread beyond the outer layer of the prostate to nearby tissues. Cancer may be found in the seminal vesicles. Stage III prostate cancer may also be called stage C prostate cancer. 15 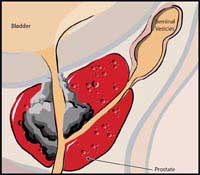 In stage IV, cancer has metastasized (spread) to lymph nodes near or far from the prostate or to other parts of the body, such as the bladder, rectum, bones, liver, or lungs. Metastatic prostate cancer often spreads to the bones. Stage IV prostate cancer may also be called stage D1 or stage D2 prostate cancer. 16