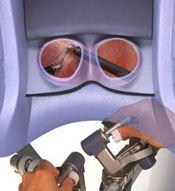 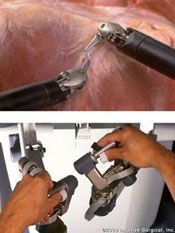 Surgeon views through the DaVinci optical system and view of robot/surgeon hand interface.

The DaVinci system also offers the surgeon improved dexterity as it uses instinctive operative controls to move laparoscopic instruments with greater movement capabilities than the human wrist would normally allow. These controls may allow for greater operative precision during the reconstruction (rebuilding) of the kidney after the kidney cancer has been removed during the laparoscopic partial nephrectomy procedure.

DaVinci robot simulates and can even enhance the normal human wrist dexterity.

A “positive margin” means that some of the kidney cancer may have been left on the kidney. With the robotic laparoscopic procedure, just as in the standard laparoscopic approach to partial nephrectomy, no large incisions are required to perform the procedure. Instead of a large incision, five or six 1/2 cm to 1 cm incisions (less than 1/2 inch) are made. The spaces in the body are gently filled with gas to make working space and a small camera is placed into the body through one of the incisions. The other small incisions are used to place working instruments, which can be used to perform the procedure.

DaVinci® laparoscopic partial nephrectomy for kidney cancer is performed by a Urologist (kidney surgeon) in an operating room. Prior to scheduling the procedure, each patient should have an extensive consultation with their Urologist regarding the nature of their kidney disease as well as all of the available treatment options. This discussion should review all the advantages and limitations of each surgical and non-surgical approach.

Once you and your Urologist have decided on DaVinci® robotic laparoscopic partial nephrectomy, a date for surgery is chosen. Typically, a patient goes to the hospital on the day of surgery. General anesthesia (you are completely asleep) is required. The Procedure is then done through three or five or six small incisions, which are either 1/2 a centimeter or 1 cm in length (less than 1/4 to 1/2 and inch). Once the DaVinci® robot has been engaged, the kidney is then identified so that the kidney cancer can be found. Once the target kidney cancer is identified, the renal artery (blood supply to the kidney) is temporarily blocked. With the blood supply temporarily interrupted, it is possible to completely remove the kidney cancer with a small margin of normal tissue all the way around it. Once the cancer is removed, stitches are used to close the kidney's collecting system (plumbing system within the kidney that carries urine), to stop all the bleeding sites, and to close the functioning tissue that makes up the majority of the kidney. The repair of the area of the kidney where the kidney cancer has been removed is known as reconstruction of the kidney.

Once the kidney has been reconstructed, the blood supply to the kidney is opened, and the kidney cancer is removed from the body by extending one of the small incisions. While the patient is still under anesthesia, the surgeon works with a pathologist to assure that the entire cancer has been removed (a negative surgical margin has been achieved). Once complete removal of the kidney cancer has been confirmed, a small tube may be left in the area of the surgery (drain) to remove any excess fluids that may collect in the area.

Once the procedure is complete, the patient is transferred to the recovery room for observation and then to a hospital room. Typically, on the day of surgery, the patient can drink liquids, walk around, and is relatively comfortable with limited pain. On the day after surgery it is common to have a regular diet. If a drain has been left in place, it is usually removed on the first day after surgery. If everything has gone well, most people are discharged home on the first or second day after surgery with limited well-controlled pain, eating a regular diet, and feeling well. On discharge, oral antibiotics and oral pain medications are typically prescribed.

There are a number of important patient and tumor parameters that are critical in deciding the type of treatment that is best for a small renal mass. Considerations are numerous but include: the size and general radiographic appearance of the mass, the local anatomy of the mass, the overall age and health condition of the patient, overall kidney function, the number of lesions in the kidney, patient personal preference, etc. The decision on a proper strategy for the treatment of kidney cancer is challenging and should be made by each patient in conjunction with a Urologist who is experienced in managing kidney cancer.

In the hands of a laparoscopic expert, the cancer control (“negative margin” rates or complete removal of cancer) are the same as with open partial nephrectomy. As such, most patients who are candidates for open partial nephrectomy can have their procedures done laparoscopically, and therefore benefit from the advantages of a minimally invasive approach (less bleeding, less pain and faster recovery).

Tumor location is somewhat important in deciding between surgical options for kidney cancer. Patients with kidney cancers located very close to the middle of the kidney may be better candidates for open partial nephrectomy or radical nephrectomy.

As DaVinci® robotic laparoscopic partial nephrectomy is a very technically challenging operation, it is not offered at many centers. A disadvantage of the procedure is that only few doctors offer this procedure to their patients. Additionally, the application of the robot in the setting of laparoscopic partial nephrectomy is new and comparison to other treatment modalities is just beginning. Overall, the robotic technology seems to be a wonderful adjunct to an experienced surgeon who is familiar with kidney cancer as a disease and laparoscopic anatomy and technique.

The tissue that is removed during the DaVinci® robotic laparoscopic partial nephrectomy is evaluated on the day of surgery to determine that the kidney cancer has been completely removed. This evaluation is done with a technique called “frozen section”, which is useful for determination of the adequacy of the surgery. However, the “final pathology” is established approximately one week after surgery when the pathologist has had the proper time to “fix” (preserve) the specimen, prepare slides, and evaluate the tissue under the microscope. The “final pathology” reveals the type of kidney cancer that has been treated and also gives the final confirmation of a “negative margin” (total removal of all of the kidney cancer). Your surgeon will usually call you at home with these results approximately one week after surgery.

While patients will typically be able to do routine activities such as eating and taking care of everyday needs, it is generally suggested that no heavy lifting or vigorous activity be performed for four to six weeks to allow the body to recover. While it is surgeon dependent, most surgeons will suggest only light lifting (less than 10lbs), gentle activity, and no driving for one to two weeks after surgery. It is typical for patients to feel drained or lack energy for several weeks after surgery, and complete and full return to activity will usually take four to six weeks. However, every patient is different and recovery is somewhat variable. Generally, the patient will feel better day by day.

With laparoscopy, wound care is generally very easy. The dressings (bandages) are usually removed by the patient at home the second day after surgery. Under the bandages there are small pieces of surgical tape. Once these start to peel off on their own, the patient may remove them. Removing the tape in the shower may be helpful and the adhesive will soften and allow the tape to be removed gently and without pain. Under the tape are the small wounds. The stiches are below the skin and do not have to be removed as they absorb by themselves.

Swimming and bathing in a tub should not be done for one week after surgery, but showering is usually permitted any time after the second day after surgery. The shower should be with regular soap and water. An effort should be made not to allow the shower to directly hit the wounds for the first several days. The wounds should be cleaned with a dry and clean towel and left uncovered. A small amount of oozing is possible for the first few days after surgery, and a clean gauze with surgical tape can be used to keep clothing dry. However, if there is any significant leakage from the wound or if the would should become red, hot, tender, or swollen, you should contact your doctor immediately.

Your doctor will typically call with the biopsy results one week after the surgery has been performed. A follow-up visit with the surgeon is usually scheduled approximately four weeks after the procedure has been done. At the follow-up visit wounds are checked and follow-up radiographic imaging is scheduled. Typically, an MRI or CT scan is scheduled for six months after the procedure has been performed. Depending on the final pathology report, which establishes the type of cancer that was removed, a future follow-up regimen is then established.